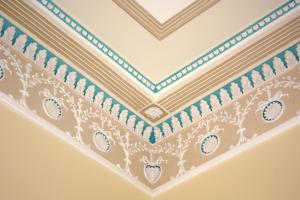 Nick Churton of Mayfair International Realty enjoys the detail of an extremely fine home in Charleston, South Carolina that is now on the market with Handsome Properties.

The Federal period in the USA spans the years between 1780 and 1820. In the UK this was the time when the style of the Adam brothers, Robert and John, was very much in vogue. This period of classical revival also became extremely popular in the US and features in many homes built during this era.

I can’t think of a much better example that 60 Montague Street, Charleston, South Carolina. Inch by period and painstaking inch every aspect of the house has been restored to its original condition – with a number of unobtrusive modern laborsaving additions such as a lift.

Built around 1800, the house was about 60 years old when the first shot of the American Civil War was fired from the battery alongside Charleston Harbor less than a mile away.

Just look at the images of this house on the web page – especially of the plasterwork and fireplaces. This is Adam style at the top of its game. I am sure Robert Adam would have admired the current owner who has poured his considerable experience and expertise into this project. In doing so he has given back to Charleston one of its finest homes in tip top condition.

This house joins many others in this lovely city that have been renovated under the watchful eye of the Preservation Society of Charleston and makes up the largest such group of preserved houses in the USA.

But I am not finished yet. To top it all Confederate general, Robert E Lee, convalesced here for a while following the civil war that ended in 1865 and even addressed a crowd of supporters from the front porch – ensuring the house’s place in American history.