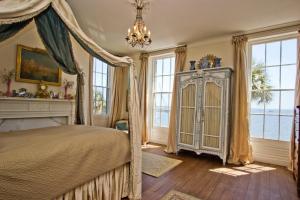 Nick Churton of Mayfair International Realty is hit by history – if not a canon ball – at one of Charleston’s finest houses now on the market with Handsome Properties.

If only windows could talk. What would the windows of The Nathaniel Ingram House in Charleston, South Carolina, tell you? For a start they would tell of 12th April 1861 when, at 4.30 am, the first shot of the American Civil war was fired from just along the street. The engagement was a bit of a one-sided affair. It only lasted 34 hours and ended in a rather gentlemanly fashion. Later in that war the house would sustain a cannon ball hit to the upper floor during the bombardment of 1864. Scarred but standing it then survived the Great Charleston Earthquake of 1886. Fortunately since then things have been relatively peaceful thereabouts.

Today 2 Water Street stands as a witness to Charleston’s rich history. But this is no museum piece. It is a home of the moment in the grand style. Standing on East Bay Street and with its main door on Water Street – once a waterway rather than a road – the house occupies three floors on a fine corner position. The main bedroom has been named as one of the most romantic in America.

Built between 1810 and 1818 by a local merchant, Nathaniel Ingram, generations of prominent Charleston families have enjoyed living in the house – including the present owners.

I always think that houses buy people rather than the other way round. And I am certain that prospective buyers will only have to stand in the magnificent entrance hall and look through the stately drawing room with its elegant tall windows looking out to Fort Sumpter over Charleston harbour to know instantly if they will become the latest in a long line of fortunate custodian owners.

The house is not just grand. It does something very special to its occupants. It makes them feel grand. What better payback for accepting the stewardship of this very important Charleston home?