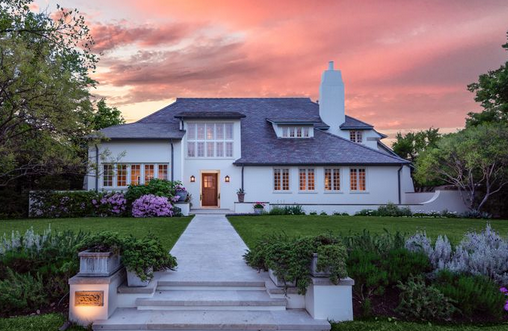 Nick Churton of the Perry-Miller Streiff Group’s London office finds a home away from home in Highland Park, one of the premier residential areas of Dallas, Texas.

The Broker: The Perry-Miller Streiff Group

Great architects don’t die; those that follow in their footsteps and truly appreciate their legacies keep their flames burning. Architect, Scott Merrill, has done just this at 3509 Crescent Avenue in Highland Park, Dallas.

Designing in the Arts and Crafts style of the great British master architect, C F A Voysey, Merrill has created a home that, on one hand, can be seen as a tribute to the great man, but on the other hand, should also be very much admired as a wonderful and handsome home in its own rite.

If you ignore the neighbouring properties – and the Dallas warmth – this house could easily be one of Voysey’s masterpieces in the leafy suburbs of outer-London. Voysey designed a number of standout homes in the area during the early 1900s.

But Voysey never had to figure out the relationship between a pool, and the main house and separate guest apartment. In 1920s London, there were no pools. But landscape architect, Warren Hill Johnson of the Dallas Arboretum, working closely with Scott Merrill, has created a modern leisure space and garden that works perfectly with Voysey’s Arts and Crafts influence. I think the old architect would be very pleased.

Inside the home are many more period features that reflect the age but also put that style in a very modern context. It all works perfectly.

One person who certainly likes this home is none other than Prince Charles, heir to the British throne and no mean architectural connoisseur and critic. In a letter to Scott Merrill he commented, “I have rarely come across something so utterly appealing and I do congratulate you on your ability to design such crisp, white, eminently satisfying buildings that represent, above all, a living tradition, but which are nevertheless contemporary”. Now that’s not something said about everyone’s home!