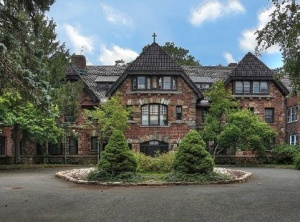 Nick Churton of Mayfair International Realty vistits a New Jersey house with quite a past but also a wonderful future.

How ironic that a German family who had emigrated to America to make their fortune should do so, only to lose it because the German navy sank their ships. The Great War was unkind to the Mosle family who had built up a successful sugar cane and shipping business out of Cuba.

In 1899 the Mosles began building Hillandale, a substantial mansion between the villages of Peapack-Gladstone and Mendham in an astonishingly beautiful and leafy part of New Jersey – about 33 miles from Manhattan. Designed by architect, Grosvenor Atterbury, it isn’t too fanciful to suggest that there are some strong German influences at work here. The result is a muscular stone-faced hill top house with three distinctive hipped roof gables to its front and rear elevations.

Later, after the Mosles had left for pastures new and the house had had several other subsequent owners, it was bought by The Sisters of John the Baptist who ran it first as an orphanage for boys and then a boarding and day school. Even today thankful old-boys who had been in the good care of the holy sisters stay in touch – more than can be said for unlucky children in some other institutions around the world. This house has a happy past after all.

So what next for Hillandale? Well of course it is up to the buyer. Perhaps someone will want to turn it back into a single family home. More likely the house, with all its wonderful architectural features and ancillary buildings, will be cleverly converted into luxury condominiums. There is quite a market for these in well-heeled Somerset County. Many local people would like the chance to trade down to something smaller, but with no diminution in standards from where they live at the moment. No worries on that account here. Hillandale oozes gravitas.

Take a ride and inspect. When you turn into the drive off Mosle Road and begin the long climb up to the house play some Wagner very loud. The Ride of the Valkyries would be ideal. It will put you in the mood and remind you never to do business that mixes sugar, ships and submarines.