As Good as Old 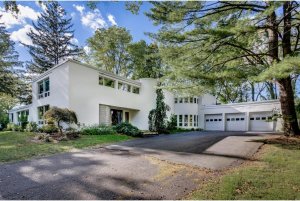 Nick Churton of Mayfair International Realty takes a look at a house in New Jersey with its design roots firmly set in the early 20th century but as fresh looking today as it would have been then. Turpin Realtors are handling the sale.

Well here is a breath of fresh air – a wonderful example of the International Style. Just imagine what a stir this architecture caused when it was fresh and new at the beginning of the 20th century. But the really wonderful thing about the look is that it is still as fresh and new today.

Was it really Frank Lloyd Wright who, in a reaction to the excesses of the Victorian and Edwardian eras and exploiting new materials, inspired the Germans and the Bauhaus? Whatever the answer the legacy of this sea-change in architecture was a clean, spare and crisp form that certainly followed function.

The Germans feared that the American public wouldn’t fully embrace this new style and that Modernist architects working in the USA would be wasted. Tell that to Richard Neutra who designed the Lovell House in Los Angeles which was built in 1928 – now on the US National Register of Historic Places.

By the 1920s and 30s Modernism had developed into the International Style – identified by rectilinear forms; light, taut plain surfaces stripped of ornamentation and decoration, open interior spaces, and a weightless quality often created through cantilever construction.

29 Lindsley Rd, Harding Township, New Jersey was built in 1958. The look hasn’t moved on much from those pioneering years – it doesn’t have to. If it isn’t broken don’t mend it. But materials have improved over time.

Americans did embrace this style and great examples can be seen all over the US. But you would have to go a long way to see – or live in – one much better than this amazing house only 32 miles from New York City.