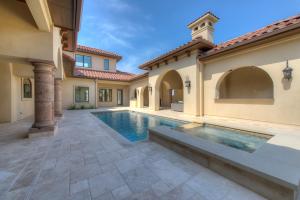 Roman builders knew a thing or two. So brilliant were they that even today their style is copied either purposely or subconsciously by their modern day counterparts. Those distinctive Roman style signatures such as columns and arches crop up today time and time again and sometimes in the most un-Roman of places.

So when I was visiting a number of great houses in the lovely hills above Austin, Texas recently I strode into one which, modern as it was in design and new as it was in construction, was somehow Roman in essence – at least outside. Clearly the architect’s desire was to make this villa as private as possible and to introduce a closely connected outside space of great intimacy with the main house. The Romans used to build an enclosed piazza. Which is exactly what has happened here. At the rear of the U-shaped house three sides open onto the tiled piazza with pool. The fourth side takes the form of a colonnade that houses pool house and summer kitchen. The result is a house within its own little world.

All that is needed is a few suitable statues of toga-clad figures and a mosaic on the floor and the picture would be almost complete. But ancient as it is in concept this is an elegant and fresh contemporary space. The thing with Greek and Roman architecture is that it is not just for the Greeks and Romans – it is for all humans. This layout works as well in Austin as it would have done in Asisium and as well in 2013 AD as it would have in 13 AD. This is architecture that connects with the human spirit at a most instinctive level. One doesn’t have to know about the origins of this style to be comfortable with it.

Romans lived in houses that allowed them live well. This house will do the same for its buyer.