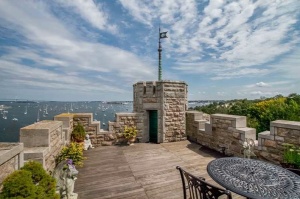 What do you get when you cross a castle with a penthouse? The answer is a pentcastle – especially when one adds a crenellated roof terrace that looks more Norman than now.

It is up on the roof of Beachbound near Newport, Rhode Island that this magnificent property really takes off. The commanding views are over Newport Harbour and Narragansett Bay. Between 1776 and 1778 part of the Royal Navy was stationed here during the American War of Independence. Today the fleet at anchor flies the stars and stripes rather than white ensigns and is made up of sleek racing yachts rather than not-so-sleek men-of-war.

Below the roof – or perhaps it should be termed, aftercastle – of this Peabody & Sterns designed building, and still with all those fine views, is a delightful suite of spacious rooms that include master bedroom, guest bedroom or den, custom fitted kitchen, dining area and marine living room. Outside, within the private estate, are Olmsted designed lawned gardens with specimen trees, a deepwater dock, boathouse and beach. Don’t bother to drive into Newport for great shops, eating and culture. In the summer it is easier and more agreeable to use the launch service that also attends the Newport yacht clubs. That is the great thing about Newport, land and sea work in perfect harmony.

Rather than heading off to New York in 1778, and to an ultimate defeat that would cost them a rather valuable colony, the British fleet might have been better off remaining in Newport. Nowadays that is exactly how lots of people feel about this wonderful city. I know I do. And I can’t think of a more exciting place to remain than in a pentcastle.