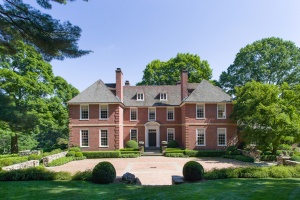 Nick Churton of Mayfair International Realty visits a very special house in New York that reminds him of England.

Had I forgotten for a moment that I was in America I should have thought I was in England.  The house, called Northshire, was distinctively William and Mary in look.  The green garden that wrapped around the house was typically English with its parterre hedging and randomly laid stone paths.  The main garden even had the feeling of the Home Counties that ring London.  It had a wide formal lawn bounded by magnificent mature trees.  It was like a vignette from an E. M. Forster novel. It could have been Surrey.  But it wasn’t.  It was North Salem, New York and only an hour from Manhattan.

But I didn’t forget where I was because there were so many constant reminders that this was American country house living at its best.  The English country house style is often a haphazard one.  It is an evolution, a mixing of styles – one generation after another making their mark with their own ideas and acquisitions.  It can be a shabby, dog-haired affair sometimes.  But there is no harm in that. Not in England.

But in America things are a little different. Style of the highest order is planned and executed with clarity and precision. Here at Northshire it all began in 1934 when the celebrated architect Mott B. Schmidt designed the house for Woolworth heir, Richard W. Woolworth.  It’s said that Schmidt was inspired by the English country house, Groombridge Place in Kent. And it’s not hard to see the similarities.

And that could have been the end of the story.  In fact the house could have sunk into a style we might call English Unloved Country House.  But then the current owners got hold of it and carried out five years of passionate renovation.  The result is remarkable.  Take a look at the details.  The owners didn’t interfere with Schmidt’s elevations.  They are as grand and impressive as ever. But the interior is a triumph of restrained elegance.  It’s not understated.  But it’s not over stated either. You could move in tomorrow and not want to change a thing.  I certainly wouldn’t. It is just right.